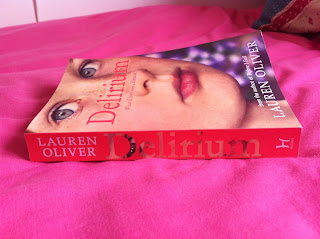 Delirium by Lauren Oliver is set in a world where love is a disease. At the age of 18, everyone must undergo a medical procedure that means they are no longer able to love. The books follows the story of Lena, a 17 year old girl living in Portland, in the build up to her procedure, but as she learns more about the world she lives in and what is outside the electrocuted fence that surrounds her city, she discovers there are a lot of things that the government are keeping secret.

As I started reading this book, I thought it was going to be exactly the same as Uglies by Scott Westerfeld, a book which I did not enjoy, but I soon realised this wasn't the case. The concept of this book alone I found really interesting. There's a lot more to the world Delirium is set in than just having the ability to love taken away. The way Lauren Oliver also includes that in their world only the rich people use electricity often and have cars I found really interesting. I also liked the way she described the obviously well thought out main side of the plot. The fact that after the procedure people seem 'numb' and the ability to love being taken away also means the ability to hate has been taken away was really interesting. I also really enjoyed the relationships between Lena and her friends and family. The way she subconsciously acts different around the cured to the uncured was handled beautifully.

I must admit, one of the things I did like about this book is that what you expect to happen doesn't. I've read a lot of books similar to this and I thought when I started reading it 'I know exactly what's going to happen' and then it didn't. Also, the relationship between Lena and Alex was beautiful.

Although I'm not the biggest fan of Lauren Oliver's writing, I can't fault her plots. There is something about the whole concept of this book that makes up for the writing style. I would definitely recommend it.