I've been very involved with books for a very long time but one thing I'd never done was go to a book signing. When a friend said that Carrie Hope Fletcher was coming to Cardiff on her book tour for On The Other Side I knew we needed to go.

I've been a fan of Carrie's in various different ways for years now. I've followed her YouTube channel since she had one video up and I think she's a hugely talented actor/singer (I saw her in Chitty Chitty Bang Bang the day before the signing and she was incredible!). When All I Know Now came out last year I read it and loved it straight away. I found her writing easy to read whilst still being interesting which is the best combination in my eyes! I was already looking forward to On The Other Side and would've bought it anyway so for the price of the hardback book it made sense to buy a ticket to the signing which comes with a hardback copy of On The Other Side and get it signed by Carrie herself. 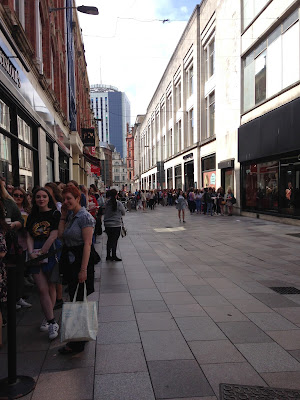 Although the queue was absolutely huge (as you can see in the photos!) we were out with signed books within the hour of the signing starting. We got there at about 11am for the 12pm signing expecting a queue to have already built up but were lucky enough to be relatively close to the front. While security didn't seem to really understand that fans of Carrie and her books aren't at all there to cause trouble and are more likely to make friends in the queue chatting about books than cause any trouble, the event was well organised and kept moving. 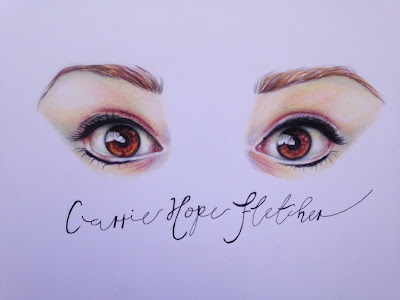 Although time with Carrie was obviously short, she made sure she had an individual chat with every person she met and was absolutely lovely. The girl in front of me in the queue gave her a picture she had drawn which you can see in the photo (which I think we can all agree is absolutely incredible) and Carrie was so excited and made sure to let the girl know how much she appreciated it. I let her know I had this blog and said I'd be reviewing the book on it and she was so lovely and said that she really hopes I like it if I'm going to review it (which I'm sure I will!) and everyone had a chance to not only get their book signed but also get a photo with her. 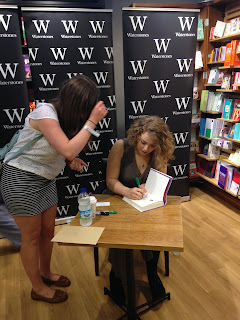 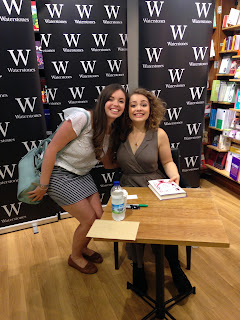 Although in total I probably only spent 2 minutes in Carrie's company the experience was brilliant. I feel so lucky to have met her even if it was brief and I absolutely love that I now own a personalised signed copy of On The Other Side! Also, one of my favourite things about events like this (I've found the same thing happens at other YouTube-related events like gigs and gatherings) is that everyone just chats to each other. An hour in the queue and I felt like I was friends with the people we were stood behind and in front of and I'm sure its because of similar personalities sharing the same interests. To the girls I met in the queue, you were all lovely and it was a pleasure to spend an hour with you, especially Sian (the hugely talented artist who gave Carrie the drawing!)

If you're considering going to a book signing like this I'd definitely recommend it. It was so much fun and to have a signed and personalised copy of a book will always be special. And to Carrie, thanks for being so wonderful and kind despite having to meet so many people. You were just as lovely as we were expecting you to be and its so nice that someone I admire so much lived up to that expectation.

Look out for a review of On The Other Side coming as soon as I finish the book! If you've already read it let me know what you thought of it below! (But no spoilers please!) 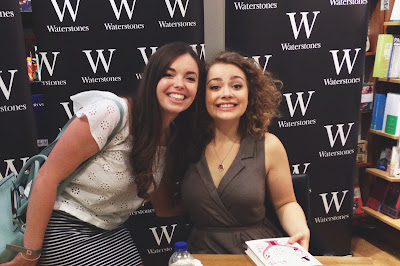 Email ThisBlogThis!Share to TwitterShare to FacebookShare to Pinterest
Labels: Signing