Although I've not been reading as much as normal this month due to craziness in terms of school work, I have acquired a lot more books this month than normal so I thought I'd share them with you!

The first book I got this month I won in a YouTube giveaway on Sarah Churchill's YouTube channel to celebrate her reaching 5,000 subscribers. If you haven't already seen her videos I highly suggest having a look. I love watching her videos and she seems so lovely! I won A Game of Thrones by George R. R. Martin and I'm excited to see what all the fuss is about! 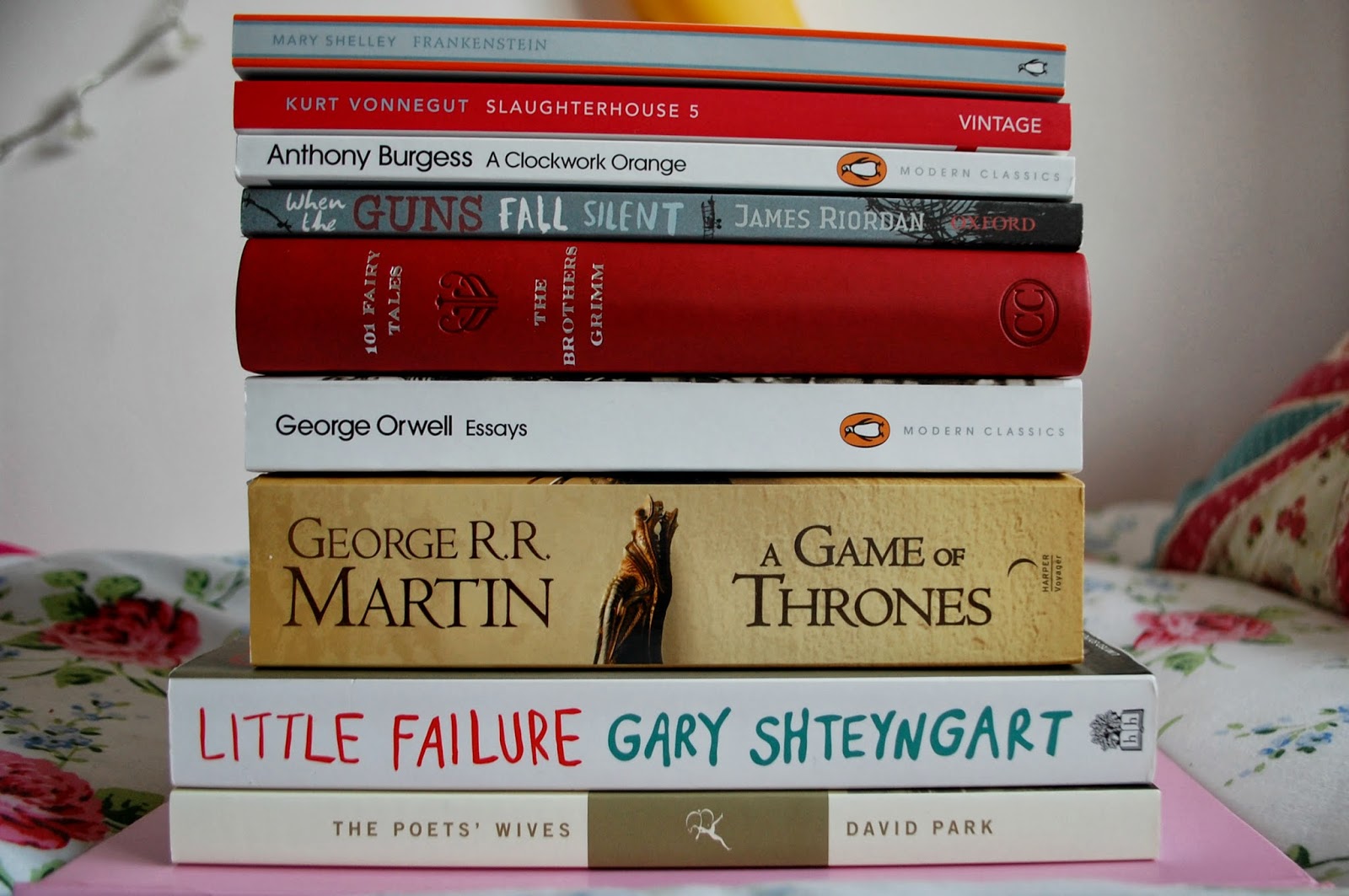 I also discovered the giveaway section on goodreads this month and I'm loving it! For those of you who don't know, goodreads have a section on their website dedicated to a scheme called 'First Reads' in which you can enter as many giveaway's as you like and all you have to do is provide an address for whoever is hosting the giveaway to send you your prize and add the book to your 'to be read' shelf. Simple!

The first book I won from goodreads 'First Reads' is Little Failure by Gary Shteyngart. Littlle Failure is a memoir following Gary's family as they make the move from Russia to the USA and how he, as a young child, has to deal with the move along with his ever-changing identity as he attempts to fit in as an American.

The second book I won from goodreads 'First Reads' is The Poets' Wives by David Park. Although I've only read the first few pages of this so far, I can already tell you that it is written beautifully. The quote on the cover of this proof copy is 'Park writes prose like a poet' (from The Times) and I can already tell you that's accurate. I'm excited to see this progress!

I ordered A Clockwork Orange and Slaughterhouse 5 from amazon as 'wider reading' for my AS English Literature course. For the exam we have to link things we've read in three genres, prose, poetry and drama, and these were both suggestions from class. I don't know much about either of them other than the fact they link to our course which is 'the struggle for identity in modern literature'. 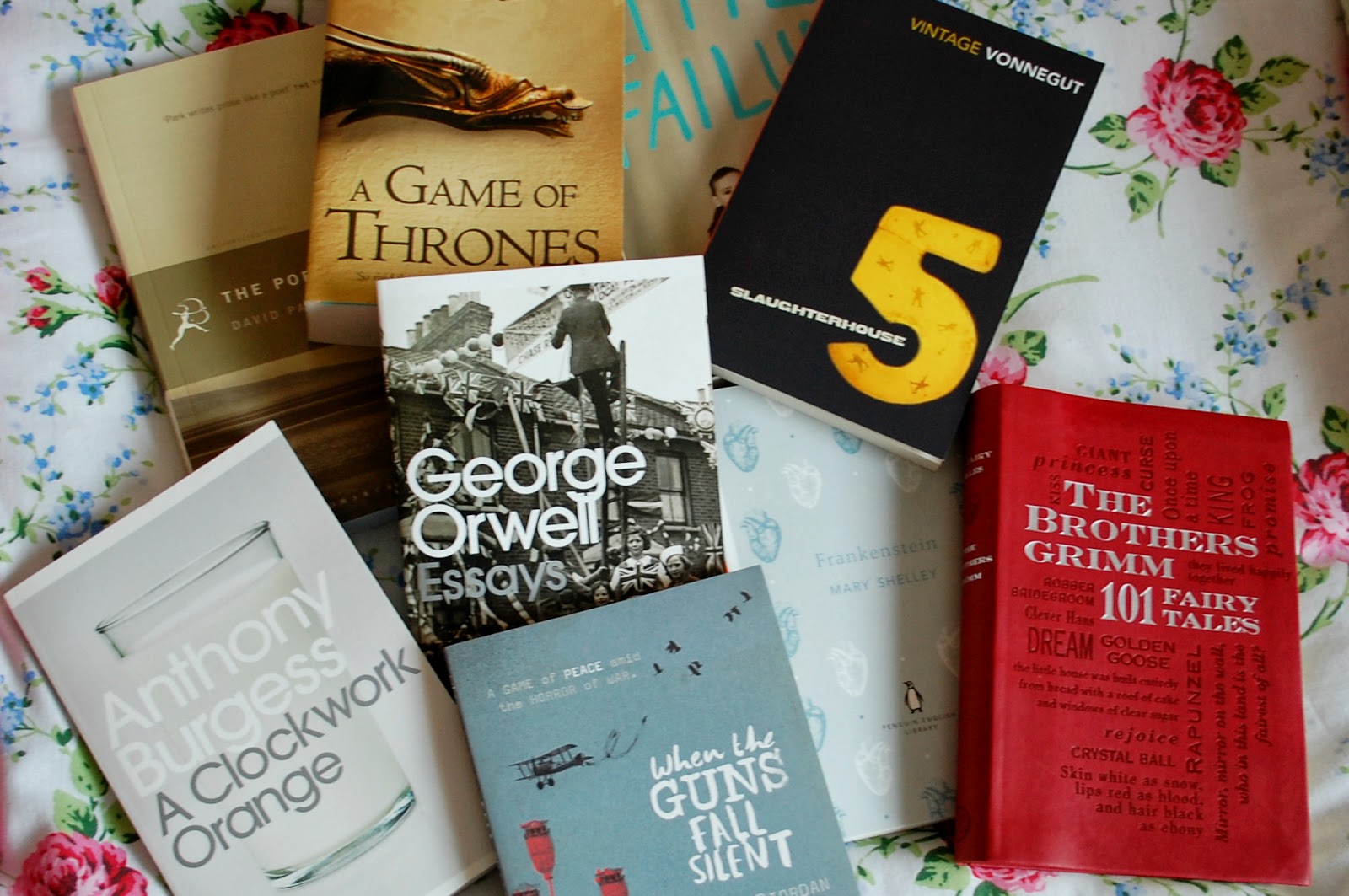 Earlier this month I borrowed a copy of George Orwell's Essays and after reading the first few, decided I really needed to own it. The way Orwell writes is absolutely beautiful and I honestly think I could read anything he's written. So far, the only works of his that I've read are Nineteen Eighty-Four and Down and Out in Paris and London and I loved both. I can't recommend Orwell enough!

Finally I bought When the Guns Fall Silent by James Riordan from The Book Depository during their 25 hour sale. This book was only about £3 and as I am studying history for A Level and part of the course focuses on Britain around the time of the First World War, I thought I'd find this interesting! All I know about it is what is says on the back, that it is based on a man as he recalls his experience of World War 1 and is based on a true story.

I also bought the first of the word cloud classics editions of The Brothers Grimm fairytales. Ever since I saw justkissmyfrog's video about these editions of classics I've wanted to pick one up and decided to buy it along with Frankenstein in the Penguin English Library edition. I love both of these editions. They're absolutely beautiful and make me even more excited to read them!

That's all of them! If you've read any of these and want to suggest which ones I should read first please do in the comments below!

Lucy x
Posted by LucyTregidon at 18:06

Email ThisBlogThis!Share to TwitterShare to FacebookShare to Pinterest
Labels: haul